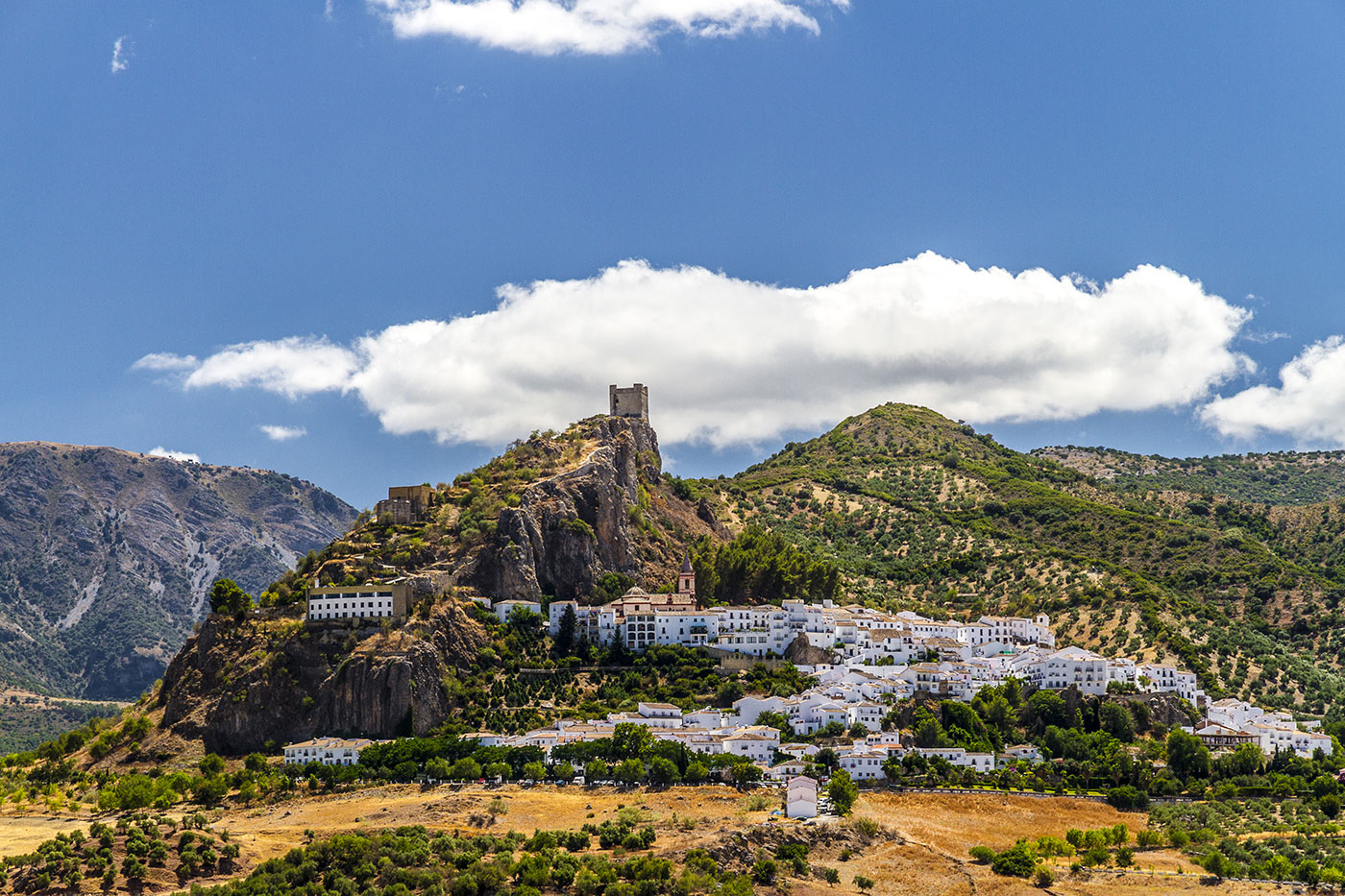 Pueblos Blancos (White Villages), are a series of towns and large villages in the northern part of the provinces of Cádiz and Málaga in southern Spain, mostly within the Sierra de Grazalema Natural Park.
All of the villages are characterised by whitewashed walls and red or brown tiled roofs.

The picturesque town of Arcos de la Frontera is one of the Pueblos Blancos, or White Villages, which are dotted through the province of Cadiz, in Andalusia. The town boasts an elevated position, perched on top of a rocky limestone ridge, called Peña Vieja, which soars up from the fertile valley and river Guadalete below. The town was declared a national historic-artistic monument for its outstanding architectural presence and location.

Arcos de la Frontera is a favourite destination for those wanting to seek a peaceful, relaxed environment away from the coast, yet within easy access to the coast’s facilities, towns and beaches. It has also proved popular with European tourists looking for an idyllic and traditional wedding location.

If you are exploring the coastline of Costa de la Luz then you’d be wise to take time out for a visit to Vejer de la Frontera. This classic white hilltop town is well worth a visit. Situated 10 kilometres inland, perched high above the steep gorge of the River Barbate, Vejer is virtually unknown by foreign tourists.

The stunning castellated town is a magical place to explore, its quiet cobbled streets meandering through a charming jumble of secret corners, hidden patios and delightful houses. Great care has been taken to preserve this beautiful town. Hidden behind ancient walls is a magnificent church, and in general visitors will barely find a hint of plastic or a trace of the 20th Century. The town square, shaded by vast palm trees, has a wonderful old fountain with traditional ceramic Andalusian frogs that spout water high into the air, thus forming a fountain.

The town has been officially declared a Historical Artistical Monument of National importance.

Located in a high valley over 800m in the Sierra del Endrinal and dominated by the magnificent rocky outcrop known as Peñon Grande, the pretty mountain village of Grazalema is most popular base for visitors to the Sierra de Grazalema Natural Park. The park is a vast protected area of rugged limestone mountains, which are famous for being the rainiest place in Spain. The high levels of precipitation account for the verdant vegetation in the surrounding countryside.

Grazalema is a lively village whose population of 2,250 swells hugely with the influx of visitors to the park. Its steep, cobbled streets are immaculately kept and are lined by whitewashed houses with windows covered by wrought-iron rejas and plant pots spilling over with colourful flowers.

If you want to taste some of the village’s best local produce, pay a visit to Sabores de Grazalema, just off the main square, next to the bull statue. The small store is a treasure trove of Spanish hams and other cured meats, along with fruit conserves and chutneys and even honey from the Sierra de Grazalema.

Ubrique is a picturesque pueblo blanco (white town) in the Serrania de Ronda Mountains of Cadiz province. Spectacularly situated in front of the crag of the Cruz de Tajo, the town follows the valley of the Rio Ubrique. This beautiful and tranquil town has a long, interesting history which stretches back over many epochs and empires. For over a century, Ubrique has been world-renowned for its leather industry supplying the likes of Loewe, Louis Vuitton and Gucci.